What Are Coffee Futures? DMs With Dean Kallivrousis, Pt 1

Dean Kallivrousis is Ally Coffee's sales and account manager for the Midwest and Rocky Regions. He began his coffee career in 2010 as a Starbucks barista, and since then has held an impressive range of roles including barista, wholesale manager, and Q Grader.

Dean has competed in and judged US coffee competitions from latte art to roasting, He has been with Ally Coffee for the last three years.

"I love coffee and I love the coffee community at large" says Dean. "It is the community that has sustained me in my ups and downs. It has helped me find myself and I feel like it's my people."

This is the first installment in a Q&A series with Dean Kallivrousis. We did the q&a over Instagram DM in April 2019, and shared the convo via screenshots. The convo is saved in my Instagram highlights, and the full transcript is below. 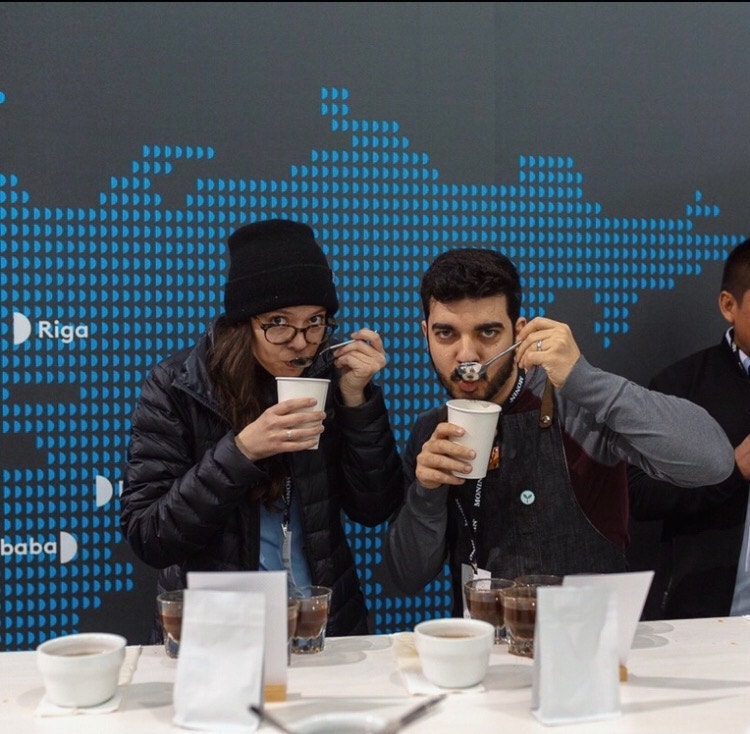 What Are Coffee Futures?

UM: Thank you so much for your time Dean! So I’m curious about how you learned about futures markets.

DK: I truthfully rely on social scientists on the subject of coffees as much as possible. I find most of our industry conversations to be internal and it helps to have a trained third perspective eye in the coffee industry.

What worries me most about coffee (and specifically the majority of coffee farmers) is the slowly depreciating value of coffee (in 1982 coffee was valued at $1.30 and with inflation adjusted coffee would be valued at $1.41 according to the ICO), the financialization of coffee and the access producers have to specialty coffee markets.

UM: I did not know that about the value of coffee depreciating. What does the financialization of coffee refer to?

DK: I’m taking the phrase from Sasha Breyer Bush who wrote the book Derivatives and Development in 2012.

In it she describes the coffee market which had an international agreement from 1962-1988 and disbanded and was replaced with derivatives as development tools promoted by the World Bank and IMF.

The agenda saw derivatives that “developed” nations had used to create wealth could be used by commodity dependent nations to achieve the same results and more efficient (read predictable) than government intervention. And so coffee was more and more financialized.

And since 2002 hedge funds outside of coffee have been allowed to trade on the coffee futures market.

UM: Ok ahh I’m sorry I’m gonna have to ask a lot of definitional questions! What are derivatives?

DK: All good! This is how I currently understand it: Derivatives are financial contracts. They are named derivatives because they derive theoreticlly from the value of some “underlier”. This would be coffee but specifically the cash market.

To quote from dictionary.com: an arrangement or instrument (such as a future, option, or warrant) whose value derives from and is dependent on the value of an underlying asset.

So sometimes derivatives are referred to as futures markets. Cash markets trade what’s available today (in coffee or other commodities) and derivatives trade the same items that will be available sometime in the future.

In theory they provide an inexpensive way to transfer risk. Because they ask for a portion of the value of the full contract it represents.

To quote from Sasha’s work on economist Fischer Black: “I believe that futures markets exist because in some situations they provide an inexpensive way to gamble. And because many people both in the business (read coffee) and out like to gamble on commodity prices.

And so we have two different types of risk shifting: hedging and speculation.

For speculation it’s probably closest to traditional gambling where they place a bet on a derivative contract and they’re betting on economic changes (will the price go up or down). They’re aiming to make profit at the end of the bet. And this is important: speculators do not generally own and do not intend to own the commodity or asset that underpins the derivatives contract (read future coffee).

Hedging on the other hand acts more like insurance so instead of increasing risk to make a profit they’re among to lay off risk and reduce exposure in a volatile market. Its aim is in stabilizing incomes not enlarging them. Money can be made on them but it doesn’t seem to be the intended purpose for hedgers.

UM: Oh I think I got it, ok! I have had a vague understanding of futures (mostly from a tinder date that sparked further research, another story).

DK: That’s incredible by the way!

UM: Lol thank you! Anyway it seems like a super complex system that benefits a specific brand of market player. Although my grasp of how futures trading works is p basic, broadly speaking it seems really fucked up that people can make so much money from trading this way. I wish there was a clear guide to futures, like futures for dummies. It frustrates me that the information available is so tautological and densely written.

DK: ME TOO. Honestly my colleague Rachel Northrop (@whencoffeespeaks) is the best person I know on understanding the technicalities of the coffee futures markets. My understanding is more from a historical/political scientist perspective.

I think what’s most important for people to understand is that these ideas and agendas are being put forward and they’re political in nature primarily through liberalizing the market. And that markets like coffee are being arranged to benefit their largest clients from my understanding.

And this is actually where I have hope. I think if we understand the structure we have the possibility of changing the structure to stabilize the market.

UM: That makes sense, and that’s such a good point. We gotta change structures y’all!

DK: Right! And I think the most important thing is finding stability for the market and proper insurance for small farmers and workers.

This is what concerns me the most with the talk of promoting alternative markets like Fair Trade, to direct trade to specialty coffee and nonprofits. It doesn’t change the structure. And this isn’t to denounce the good work from all of the above but I think if we want to see greater equity for producers we need to talk about protections for those most vulnerable.